If Silverstone was a slow burner, then Spa-Francorchamps set alight right from the very beginning – with GTWR Racing Team Audi driver Mikhail Statsenko coming out on top of the pile for his first race victory of the season.

Spa-Francorchamps is almost always guaranteed to produce something outstanding, and that was once again the case in the second round of the SRO E-Sport GT Series AM Championship on Saturday evening. The spectacular image of 45 glorious GT3 machines racing around the home of the Total Spa 24 Hours is a sight to behold, and this weekend our AM drivers did the famous venue justice in what was an enthralling 60 minutes of (very wet) racing action.

Silverstone played host to the opening round of the season back on May 16th, and while much of the racing was impressive, the British Grand Prix venue offers quite the challenge for overtaking, producing a sightly processional race that our drivers peppered with sporadic intense battling.

Heading to Spa – an entirely different prospect all together, few expected the second round to be dull – and once the action finally got started, the drama was front and centre right from the green flag.

Firstly, let’s address the issues. Unfortunately, an problem with the Assetto Corsa Competizione software presented the event organisers with more than a few headaches on the build up to race start. Impacting various servers and events hosted with the simulation, this unexpected bug would prevent the race from starting on time – with several stabs at getting the action underway having to be taken before we finally got that much anticipated virtual green flag.

Prior to race start, it would be very much an Audi benefit at Spa-Francorchamps, with the previously dominant Porsche brand not enjoying the additional 27kg of penalty weight – opening the door for the Ingolstadt manufacturer to lock out the front positions – leading many to wonder exactly how much damage control would have to be employed by the early championship leaders. 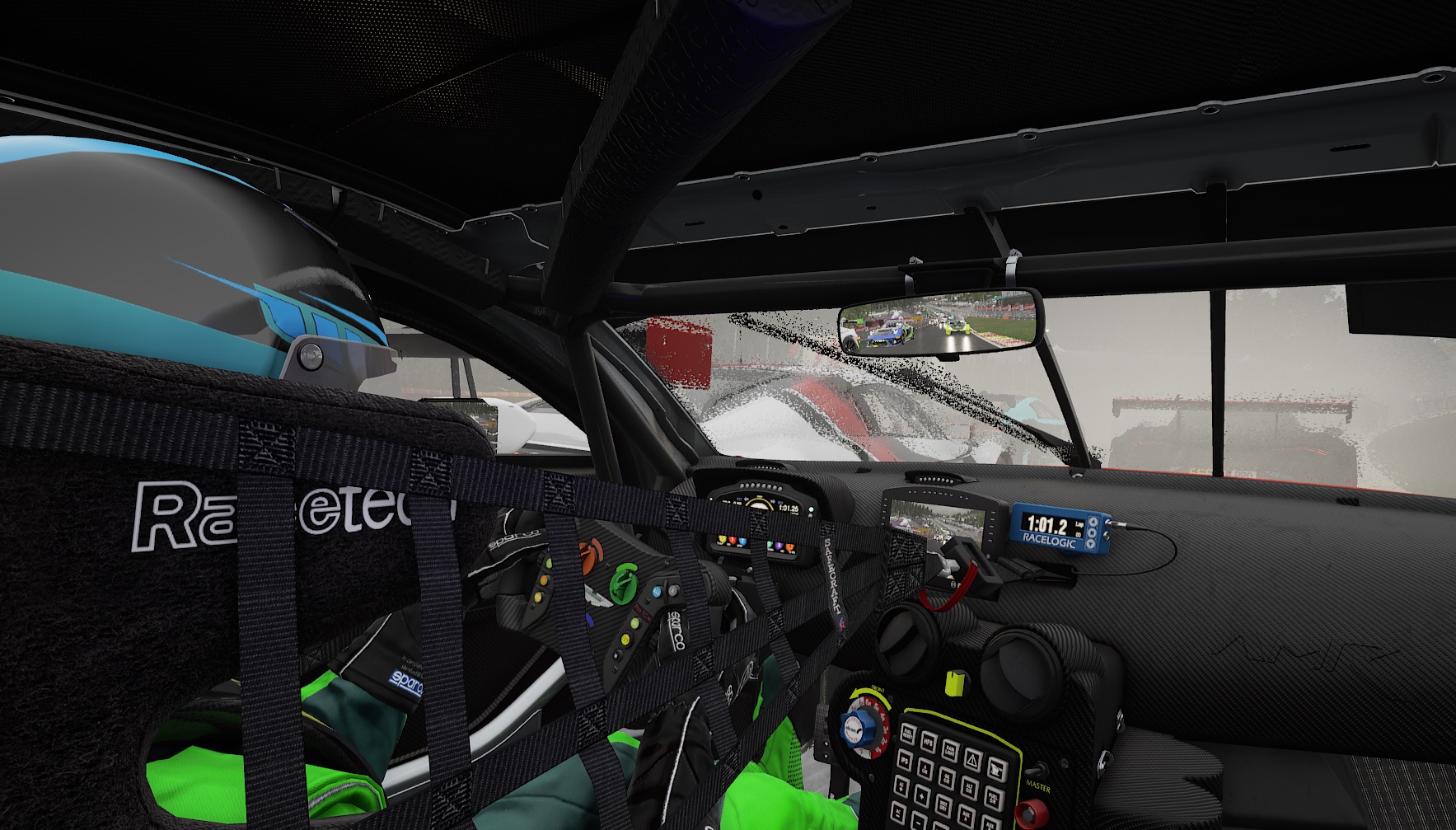 Race start would see the field safely navigate the wet conditions up through Eau Rouge and Raidillon for the very first time, however standing water at the top of the hill caught out early race leader and pole man Tim Jarschel – leading to a chain reaction accident that involved, well, pretty much everyone behind. Reminiscent of the big Formula One shunt in 1998, but this time without the need for red flags and spare cars throughout the field. 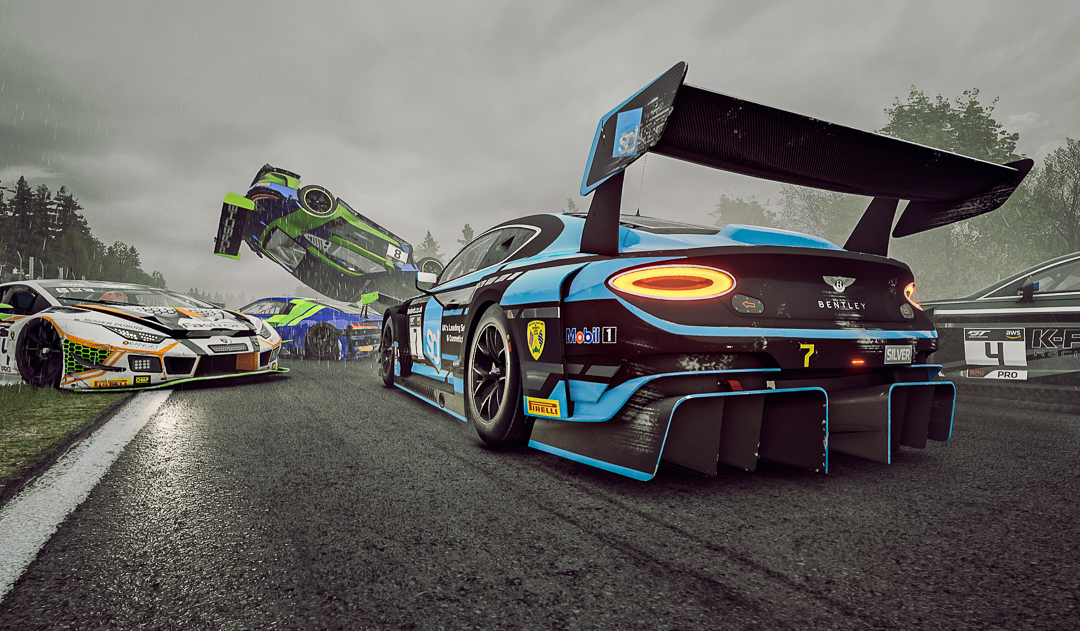 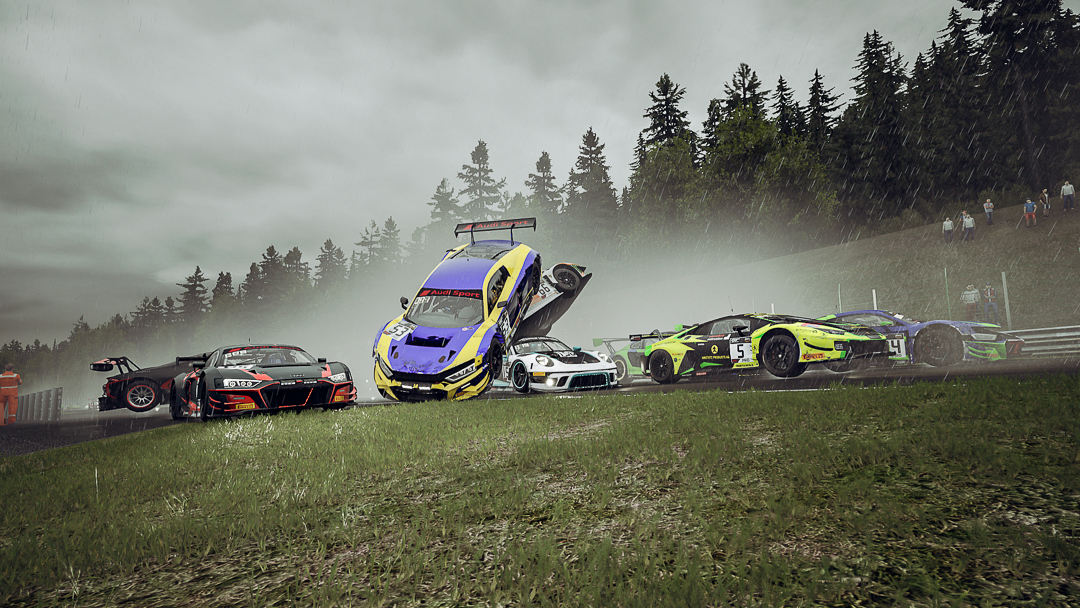 The chaos caused by the opening lap fracas played rather nicely into the hands of Audi’s Mikhail Statsenko, with the Russian driver taking his opportunity with both hands to grab an early race lead ahead of the chasing field. Having only managed a disappointing 16th last time out at Silverstone, Statsenko would show great tenacity in the opening laps to pull out an early advantage that stretched as far as six + seconds in the first third of the race, but with Scorpati in the sister Audi an ever present threat, and the trickiest conditions imaginable, things would certainly be far from comfortable for the our new race leader.

The wet weather continued to catch out a number of the drivers throughout the race, with Florian Hasse one of the highest profile causalities, getting caught out by that pesky puddle atop the Raidillon section and sending the Euronics Gaming driver hard into the barrier. Fortunately for Hasse, his black and gold Audi R8 LMS GT3 would survive the impact, damaged, but in one piece, and from that point onward the race would become increasingly difficult for the 25-year-old German as he firmly entered damage limitation mode for the remainder of the action. 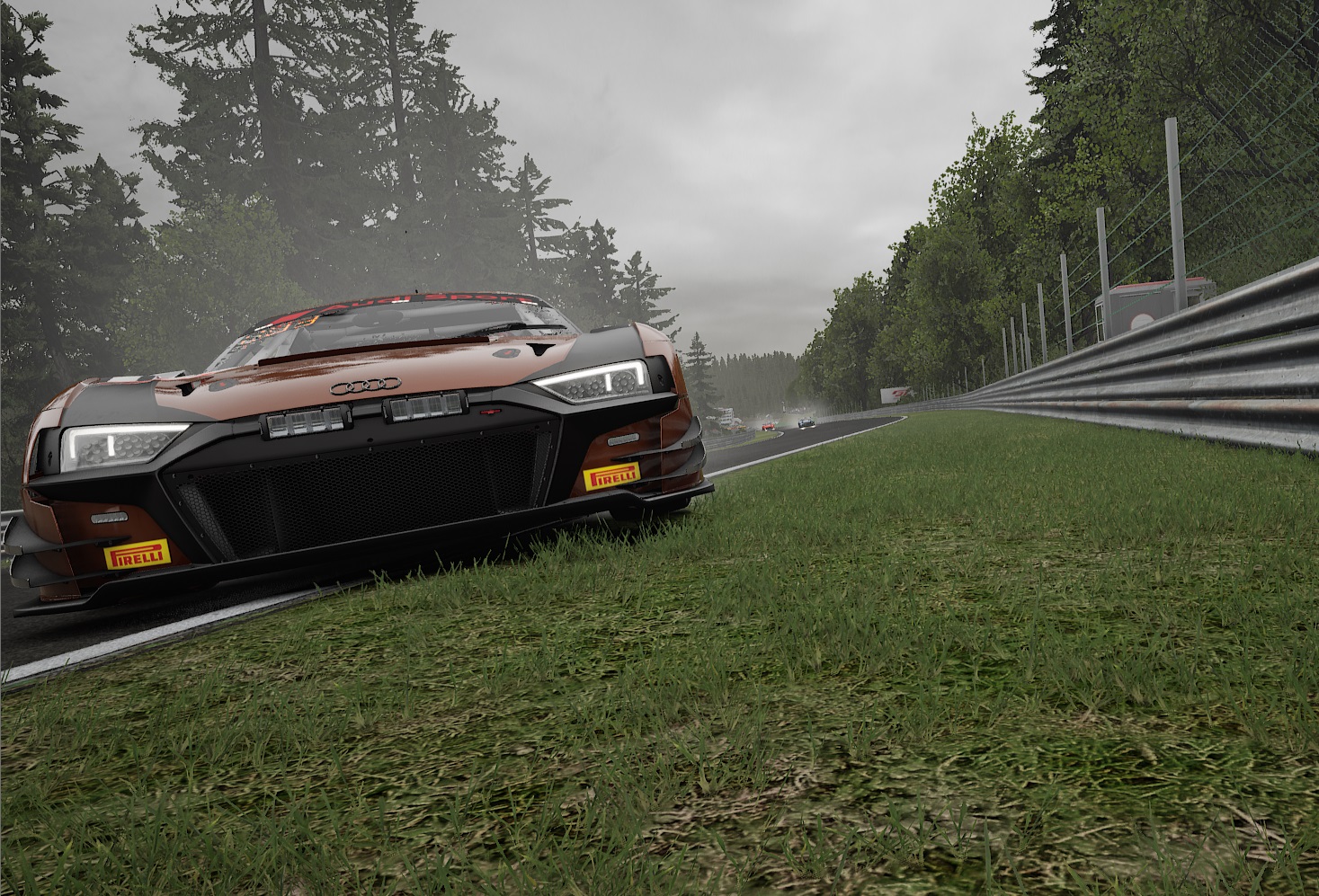 Sadly for the Lamborghini contingent, Spa would once again be a nightmare weekend for those representing the raging bull. Despite a more competitive showing in qualifying, all five drivers would find themselves in the very heart of many off track incidents, eventually failing to trouble the top 20 scorers in what was yet another race to forget for the Italian supercar manufacturer. 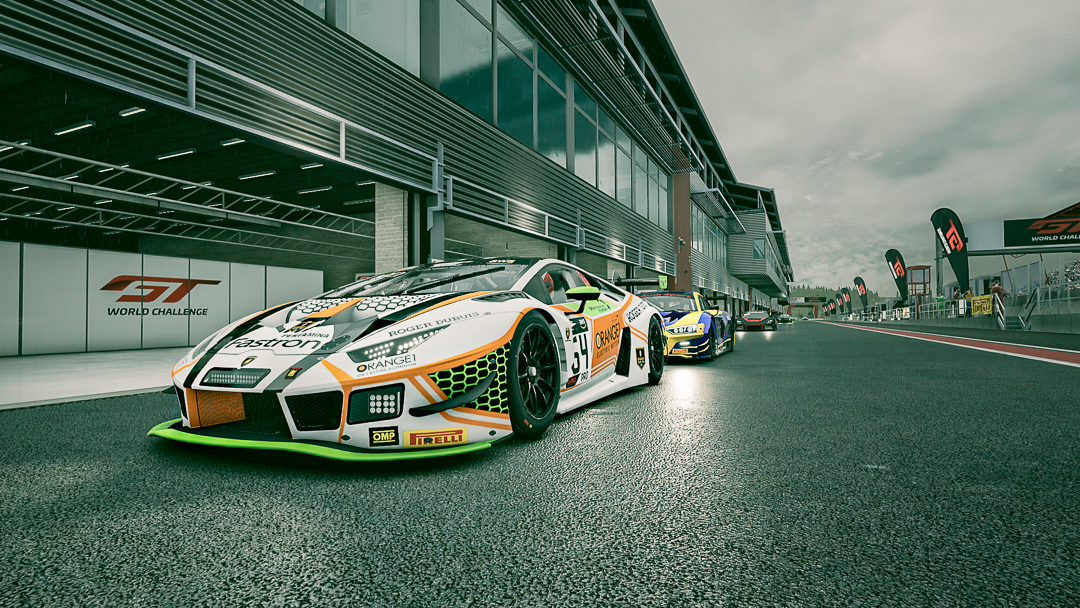 Any hopes of the weather abating during the course of the race were rapidly abandoned by the 45 strong field of drivers as the race progressed into the second 30 minutes of running, as it became abundantly clear that the wet stuff was here to stay. As the drivers became more accustomed to the conditions the race really opened up in the second half, with Lago Montero and Hasse providing plenty of thrills in the battle for 4th position, with the fight eventually going the way of Lago Montero after a spirited defensive drive from the damage riddled Hasse Audi. 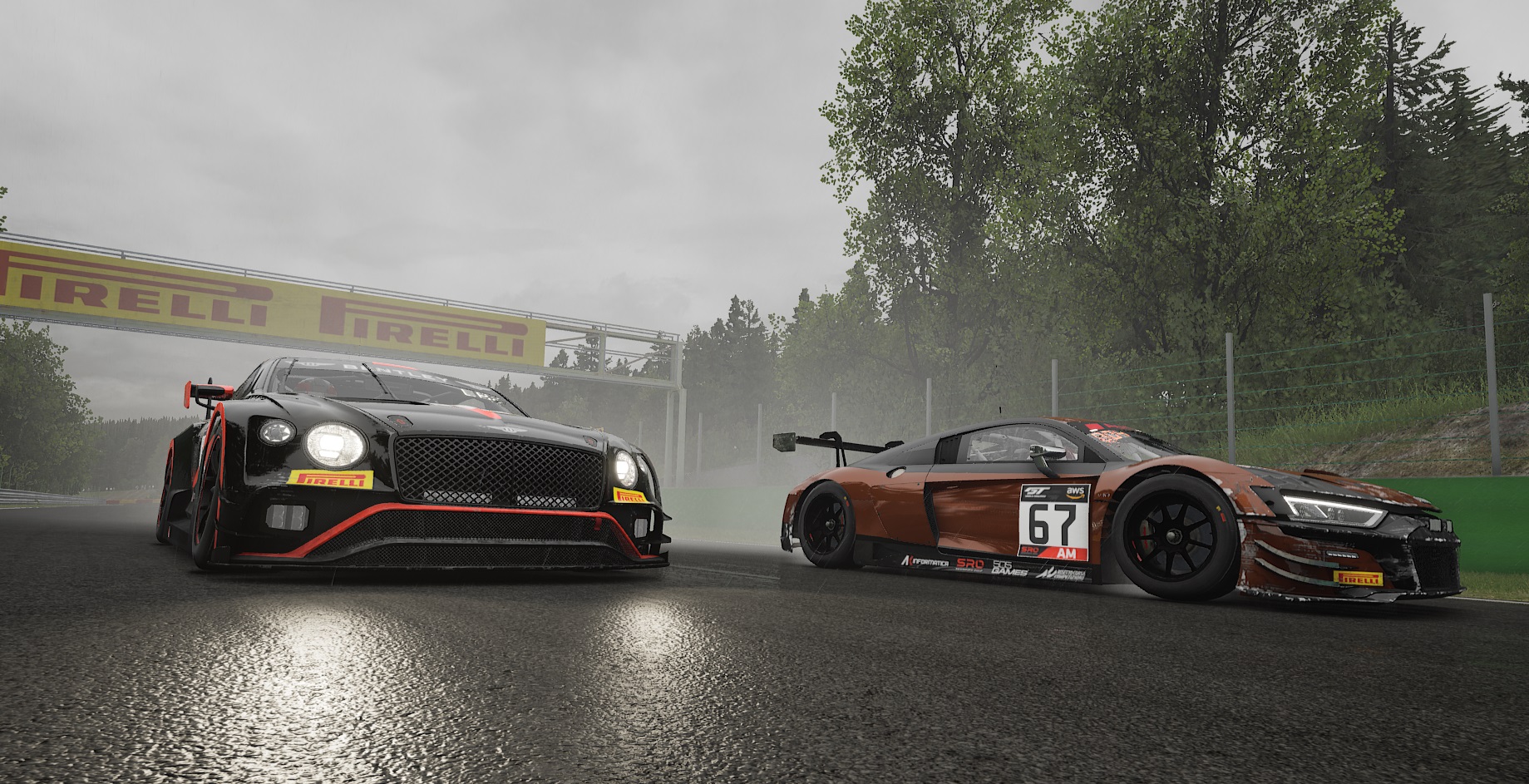 Up front, early runaway leader Statsenko would find himself under increasing pressure from the now hard charging Scorpati Audi, the Italian putting on a late charge in his GTWR Racing Team machine as he looked to find a way past the race long leader into the final laps of a frantic event. Sadly for Scorpati, the 31-year-old would require more grip than the circuit was willing to give up at this stage in the race, ending with the Italian spinning his car when lining up for a push on the race leader – allowing Statsenko the breathing space he needed to stoke home his black and silver machine to the chequered flag. 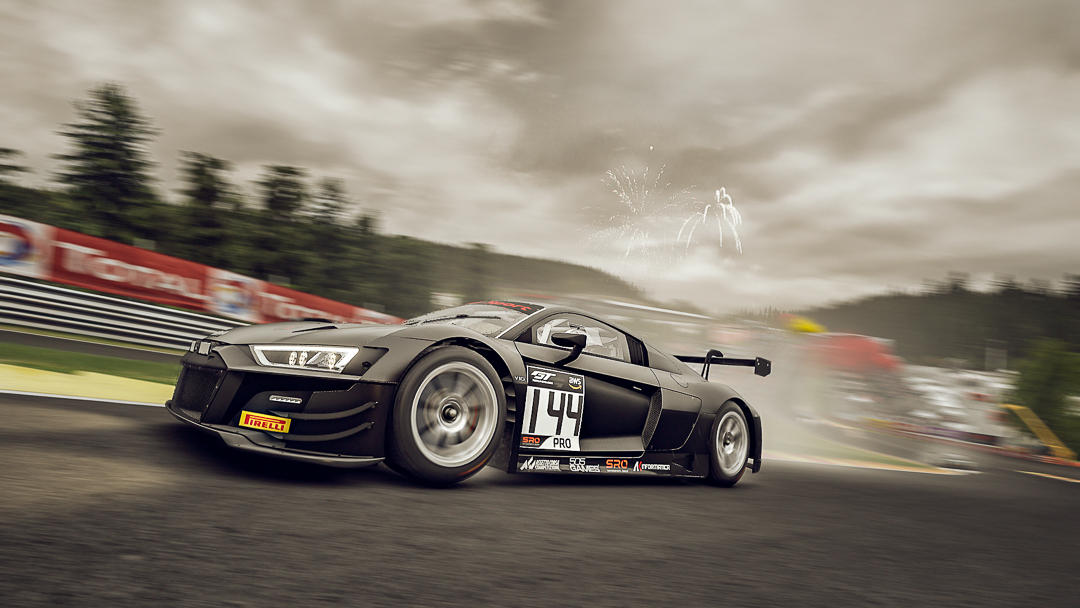 With Audi 1-2 at the front, it would be left to Samir Ibraimi to hold up Porsche honours in third position, a further 28 seconds shy of the front runners, with José Lago Montero playing the role of point man for Bentley in fourth. Rounding out the points paying positions would be Florian Hasse for Audi in fifth, Corrado Ciriello in the sister R8 sixth, Gerard Martinez Amer for Bentley in seventh, Maciej Malinowski, Raig Strehlow and Simone Minio eight, ninth and tenth for Porsche, Bentley and Porsche respectively. 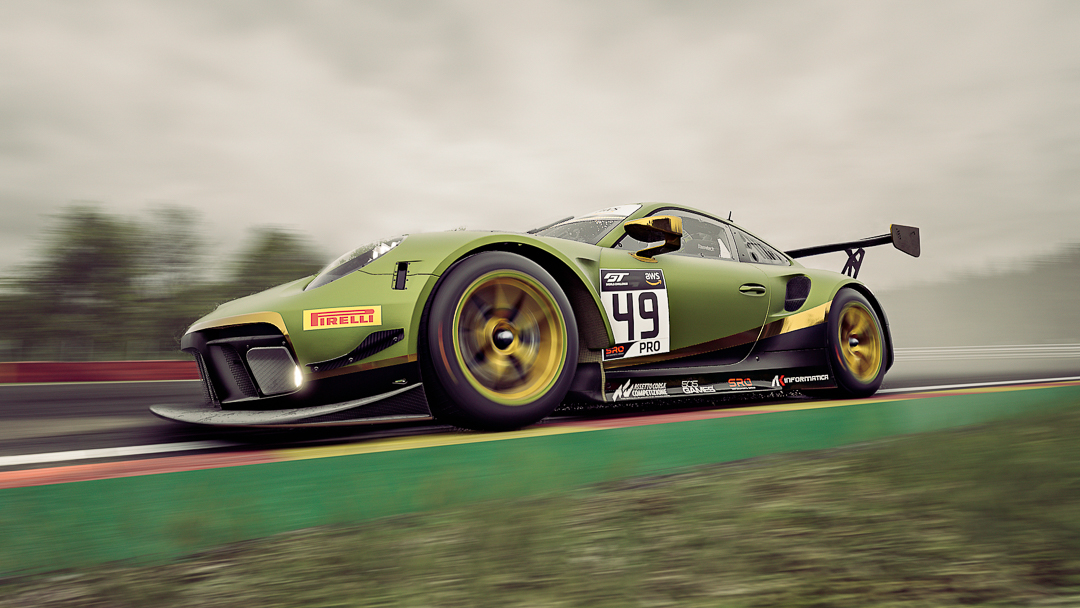 In a rather interesting twist, thanks to the opening lap incidents only Samir Ibraimi would score points for the second race in succession at Spa, giving the Spaniard a slender two point lead in the drivers standings as the 19 points scoring drivers are separated by an incredibly small margin – as just 11 points cover the top six drivers heading into the final three races of the season – impressive stuff, and still absolutely everything to play for in what is shaping up to become an exceptional season of racing.

Thanks to our incredible broadcast sponsors for this race, we are proud to have the opportunity to reward both our viewers and drivers during the course of the season ahead.

During the second round at Spa on Saturday, Twitch user SoapSR won the viewer competition and earned himself an epic GT Omega Racing Pro Simulator cockpit and seat, while it was Mikhail Statsenko who came good in the driver competition, taking home a wonderful collection of personalised Abruzzi sim racing gear! Congratulations to both SoapSR and Mikhail on their wins! For those of you who missed out this time, don’t forget we have plenty more chances to win incredible prizes during each of the upcoming broadcasts – so don’t forget to follow RaceDepartment on Twitch, tune in for Round 3 from the Nurburgring on May 30th, and enjoy some classic esport racing action!