You may recall earlier in the year that Ford wanted help from the gaming community. The brand, through its Team Fordzilla esports team, asked gamers to help it put together a design for a new car.

It wasn’t going to be just any car, but the “ultimate virtual racer”. The plan for the car, known as Project P1, was to create a racing machine for the gaming world. Ford’s designers and the Team Fordzilla captains decided on various attributes which they then presented on social media for the gamers’ vote. With the brief determined, Ford then designed the final products which again were subject to a public vote.

The P1 concept is a design from Arturo Arino, a UK-based exterior designer at Ford. His vision of the P1 garnered some 84% of the final voting. While it’s already a pretty outlandish result — something that wouldn’t look amiss as a Vision Gran Turismo car — the design includes some touches that are only possible in the virtual environment, for now at least.

You can see some of those in the clip above, with the car’s light-up tires being the most obvious feature. The car also has “morphing technology”. That doesn’t mean it’s a Transformer, but that the vehicle adapts its shape to suit the circuit. If you need a long tail to confer high-speed stability, such as on the long straights of Circuit de la Sarthe, the P1 will comply. It looks rather like the rear wing will also adapt for higher or lower downforce. 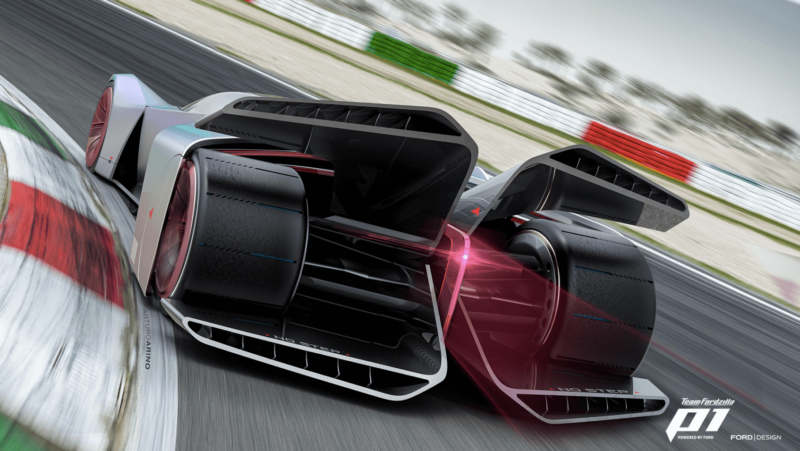 Ford hasn’t revealed any performance specifications for the P1 at this point, though it appears to be good news for fans of traditional motorsport as the engine sounds like a pretty stressed V8. The brand is also currently building a full-size replica of the car at its design studios in Cologne, Germany — also the home of Gamescom.

However a virtual car isn’t much use without a virtual environment in which to use it. To that end, Ford is apparently in “advanced discussions” to bring it to a “popular racing game” in 2021. Ford isn’t saying which game, but given Team Fordzilla UK’s captain, Leah “Leahviathan” Alexandra, regularly appears on official Forza Monthly streams, our bet is on Forza Horizon 4. That said, there are plenty of alternative titles, and next-gen is hoving into view too.

“The Team Fordzilla P1 concept has been an incredible project for our designers as it let all of our imaginations run wild. We hope gamers are as excited about the outcome of their choices as we are.”