The warm rays of summer have graced the UK for a new week, marking the start of a fresh season in Forza Horizon 4. It’s the official kickoff for Series 26, bringing new prizes celebrating the very best of British.

A new Summer Playlist brings an updated quartet of prizes, with cars both old and new. As a very stately Bentley motors its way into the festival this week, let’s dive into Summer’s content offerings. 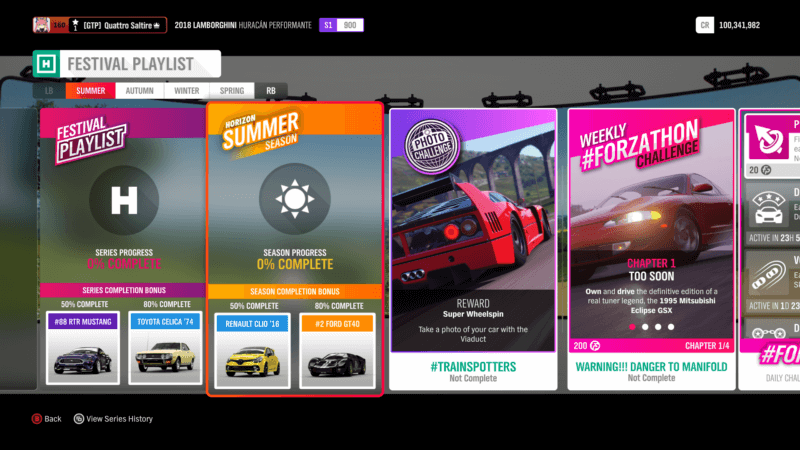 Both seasonal and Playlist completion prizes are populated by returning content, with a definitively French hot hatch muscling in on the British parade.

The Renault Clio R.S 16 Concept may not have made it into production, but it remains one of the most extreme Clios ever built. Under the skin lies the running gear from the Megane 275 Trophy-R. That means a 2.0-liter turbocharged engine is squeezed under the hood, making 271hp. With track-tuned suspension upgrades, this hot Clio should make light work of twisting country roads.

Alongside it is the 1966 Ford GT40. This vintage racer was developed — in Britain — with the sole purpose of beating Ferrari at Le Mans. The GT40 would beat Ferrari in the famous 24 hour race, before winning four times in succession and carving its name into legend. A 7.0-liter V8 sits underneath the beautiful lines, and 485hp is enough for 200mph.

Completing the Playlist will net you the Ford Mustang RTR #88 Formula Drift and a 1974 Toyota Celica. Over with the seasonal championships, there’s another opportunity to win the bombastic Lexus LFA supercar.

The main highlight this week is the 1992 Bentley Turbo R. Despite similarities to the Rolls Royce Silver Spirit, this Bentley complements pomp and luxury with turbocharged firepower. Under the hood sits the iconic 6¾-liter turbocharged V8 putting out a healthy 295hp. You won’t be getting anywhere particularly quickly, since the Bentley also weighs 5,400lb.

If you want the Bentley, you’ll need to win “The Sun Never Sets” championship.

A new season means a new Photo Challenge for this week. #Trainspotters requires you to snap a picture of your car at the Glenfinnan Viaduct. The latest Monthly Rivals event will give you an opportunity to take an early drive of the electric Jaguar I-Pace before its release for the Autumn season.

This week’s events and prizes are listed below:

The Trial: Batten Down The Hot Hatches (Co-Op Championship) 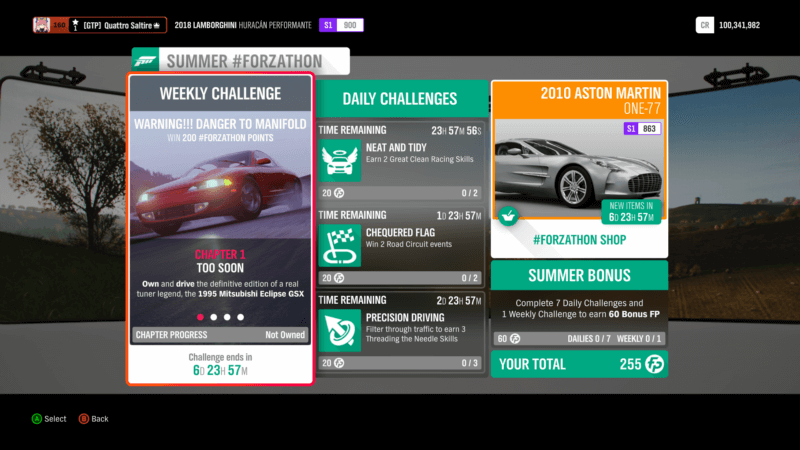 Moving away from Britain, Forzathon looks at a Japanese car that became an American tuner hero: the 1995 Mitsubishi Eclipse GSX. Climb aboard and get things rolling.

Next up, hit the streets and take victory in 6 Street Scene events. Aftwerwards, head over to the quarter mile and win 5 Drag Strip events. Just make sure your manifold and floor are secure first.

Finally, bring on the style points as you’ll need to earn 5 Showoff Skills during races to finish this week off. 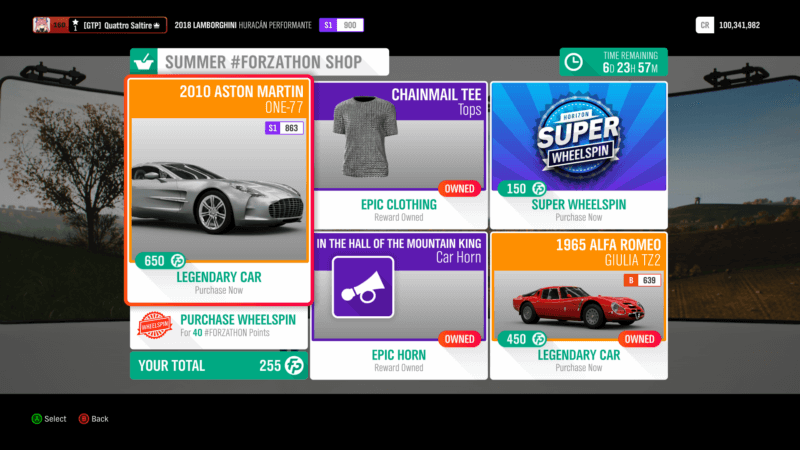 The shop lineup this week is all about rarity. Keeping with the UK theme, the headline car is the 2010 Aston Martin One-77.

If you want this striking Aston, you’ll need 650 Forzathon Points, but it will certainly get you noticed when you roll up to your next online car meet.

Winding back the clock, we find the 1965 Alfa Romeo Giulia TZ2. Designed for sports car racing, the TZ2 enjoyed a successful career. The focus of the TZ2 was on lightness, meaning the 1.6 liter engine only develops 170hp. But with a weight of less than 1,400lb, the Giulia will carve up corners.

Buying the Giulia will put a dent of 450FP in your wallet, but it will save you from spending millions in the Autoshow.

Novelty items available include the Chainmail T-shirt and the “In The Hall of The Mountain King” horn.

Sim Driver Coaching – Is It Worth It?