Sticking to its fortnightly schedule, there’s a fresh set of GT Sport Time Trials starting today. Both events feature an iconic corner, though one is at a real circuit and the other a Gran Turismo original track.

The tuning event for this set takes you to California’s Laguna Seca. Now sporting the slightly unwieldy, sponsor-led name of “WeatherTech Raceway Laguna Seca”, the famous American course has been part of the Gran Turismo series since 1999’s Gran Turismo 2. That makes it the oldest real-world circuit in the game (though GT2 also sported a rough approximation of a section of Pikes Peak), so you’ll have had plenty of time to familiarize yourself with it…

Your car for this event is also as American as they come. Chevrolet’s C7-generation Corvette Stingray proved to be the last front-engined Corvette after a 67-year run — and the Corvette actually predates Laguna Seca, by some four years. With tuning enabled, you’ll have the chance to tweak the C7 as you see fit, to dial out some of its foibles and get through the famous Corkscrew corner unscathed.

The fixed settings event will be a pretty stern test of your bravery. It’s a simple matter of picking your car and going as fast as you can at Dragon Trail Seaside, a fictional track introduced to the series in GT Sport.

As for the car, you can pick anything from the Gr.1 category. That consists of modern LMP1-H prototypes, classic Group Cs, points in between, and some fictional cars from the Vision GT stable that roughly fit the brief. These are cars that are almost certainly too fast for this circuit and, if you’re keeping up with your GT Sport lore, that means you’ll also be trying to navigate the Chicane of Death in some of the fastest machines in the game.

GT Sport‘s Time Trial mode is a global competition, ranking your best time against all players worldwide, rather than just those in your region as with other Sport Mode events. These two time trials will run through to September 10, when two further events will replace them. 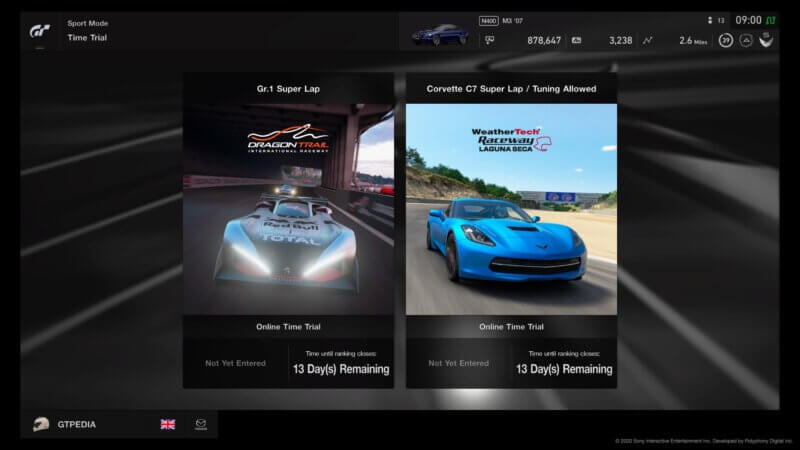